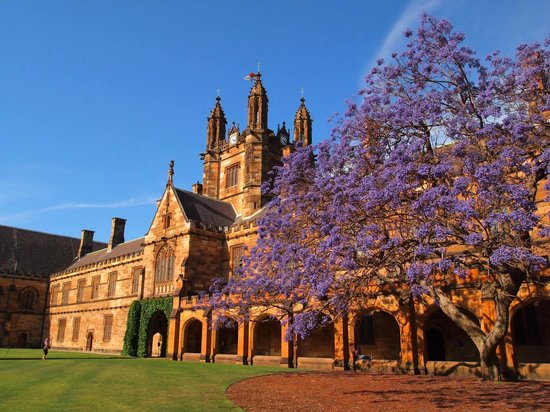 History of the institution

The University of Sydney is one of the most recognized research universities in Australia. It is ranked #42 university on the planet according to the popular statistics source. It is a public university, which means it is supported by the government, and a research institution that was founded in 1850 as the first Australian university. From that time on, USYD continues to be one of the leading institutions in Australia. The history of the university started when two men – William Wentworth and Charles Nicholson – decided do propose to expand the Sydney College, which already existed, into something greater. Through time and endeavors, the establishment of the USYD took place and became a remarkable point in Australia’s history. In 1938, some other research institute was initially established as a part of the University of Sydney. Later on, the college became greater and was separated and was made a University of New England. In 1990, the USYD included such crucial detachments as Conservatorium of Music, College of Health Sciences, and the separate institution – the Institute of Education. From that time, the university campus was extended and lots of facilities were added in order to modernized the ways of education that are offered.

The University of Sydney offers a variety of courses for undergraduate type of studies. The school of medicine is offering further specialization in medicine and biology. The music conservatorium is a facility for those ones who decided to continue their music education on a graduate level studies. Apart from giving its students a huge set of different research, career, and studying opportunities, the University of Sydney is also the only institution that has a distinct class ranking system called ATAR. ATAR is a certain number between 0 and 99.95 that shows a student’s rank among his/her classmates. The college is just amazing! Check out what you would be able to study: Social Sciences and a Study of Art, Modern Business, Engineering and Information Technologies, Health Sciences, and Natural Sciences. There are 3 graduate schools that are associated with the University of Sydney. Those institutions are: Architecture Academy, Design School, and Planning Center; Conservatorium of Music, and the Law School.

The University of Sydney has some great facilities to offer. For example, the institution’s committee that operates on sports and fitnesses, called SUSF, offers special tailored membership plans and training options for everyone regardless of abilities and skills. The committee organizes trainings that are specialized and managed for students, and those sports extend from yoga to rock climbing. Clubs and student societies that are organized in the University of Sydney are also something that is good for everyone. With more than 200 organizations, the USYD continues to be one of the best colleges for student life in recent years. The offered choices of extracurriculars also vary in the amounts of practicing and the requirements that the students and potential team members should meet. University of Sydney is a truly unique facility.